‘Pigman’ re-joins PSE Nation for the first time since 2007 with an exclusive endorsement and TV Partnership within Pigman: the Series on Sportsman Channel & Outdoor Channel

TUSCON, AZ (Jan. 9, 2020) – PSE Archery is proud to announce that the world-renowned ‘Pigman’ himself, Brian Quaca, has re-joined PSE Nation with a contract extending through the end of 2024. Since his debut on television in 2009, Pigman has continued to headline the outdoor airwaves with his relentless and rough and tumble approach to hunting hogs.  As a top perennial network performer over the last decade, his hit television show, Pigman: The Series, combined with a fantastic social media following, have flourished making him one of the most entertaining and recognizable outdoor industry personalities today.

“It doesn’t get much more fun than watching Brian Quaca do what he does best,” said Pete Shepley, Founder of PSE. “Not only is he a world-class bowhunter and riflesmith, but with his huge personality and relentless energy, his hunts are some of the best you’ll ever see.”

Quaca’s background may come as a surprise to many of his viewers, but it certainly explains why he is arguably one of the most well-rounded and technically savvy outdoor spokespeople in all of television.  Prior to his role as Host and Executive Producer, ‘Pigman’ cut his teeth in trade school as a machinist where he honed his craft for building high quality custom rifles.  In his early 20s, Brian and his Father, Tom (Dap), began outfitting whitetail and feral hog hunts on their property in Central Texas where he earned the nickname ‘Pigman’ from his clientele. As his custom rifle and outfitting businesses blossomed in the late 90s and early 00s, Brian would charge down the path of outdoor television with his entertaining personality and incredible ability to self-promote using the exploding population of feral hogs as his arch nemesis.   Chasing these massive beasts would give him a unique opportunity to mainstream an underestimated and nationally uncommon species all the while allowing him the chance to put a wide range of archery and firearms equipment to the test on one of the toughest pound-for-pound animals in all of North America.  It would be that very combination of technical knowledge, outfitting and real-world product experience that would prove beneficial in Pigman’s ability to stand behind products as an ambassador for several of the industry’s most elite companies.

Brian and his team will be working closely with PSE in creating new ways to reach more people interested in archery, from all walks of life. His primary focus is growing the sport, one shooter at a time, by showing them that the thrill of the hunt is something anyone can enjoy, with any bow from entry level models all the way to top-tier premium models. This “any bow” approach connects directly with the PSE product line, which is unique in the industry for catering to shooters at every ability and price level.

In addition, Brian will work with PSE’s engineering and product design teams to help create the next generation of bowhunting equipment. With his prior and current experience helping elite manufacturers design and market some of the most respected gear in the market today, Brian is confident he can help PSE deliver for bowhunters worldwide.

“Couldn’t be more jacked up to reconnect with Pete Shepley after spending over a decade bouncing around different manufacturers.  This industry is funny sometimes, but I’m a firm believer that everything happens for a reason. The timing couldn’t be more perfect. Pete has assembled a great team which gave me the confidence that PSE is about to light up the archery market with some incredible products, the same way we did together back in the PSE Gorilla Squad days of the ’90s when I first began creating the Pigman brand,” said Quaca.  “It’s good to have an elite long-term partner to work with as we bust our ass to give consumers the confidence they need to put animals in the dirt.  Simply put, I’m here to put this equipment to the test, give my seal of approval and show people that PSE is serious gear for serious hunters.”

Watch for PSE compound and crossbows to show up on Pigman: The Series in the coming months. In addition, stay tuned to both PSE and Pigman marketing channels for a list of public events featuring Brian and PSE planned in the very near future.

As Host and Executive Producer of Sportsman Channel’s top-rated ‘Pigman: the Series’, Brian Quaca has continued to grow in popularity as an outdoor entertainer and spokesperson during his decade on television.  Often cited as the man behind mainstreaming hog hunting media, Pigman entertains the masses through linear and digital channels with riveting content documenting his pursuit of feral hogs and various other wildlife species across the globe. Catch Pigman: the Series on Sportsman Channel and Outdoor Channel in more than 50 countries internationally.  For specific airtimes, check your local listing. Learn more at http://PigmanTV.com or follow him on Facebook, Instagram, and YouTube. 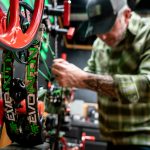